Diversity, Equity, and Inclusion in Science

As part of a team of staff and faculty, Melissa E. Flores ’16 helped Barnard’s Biology Department redesign its curriculum to ensure inclusivity for students from all backgrounds. #BarnardCelebratesWomensHistoryMonth 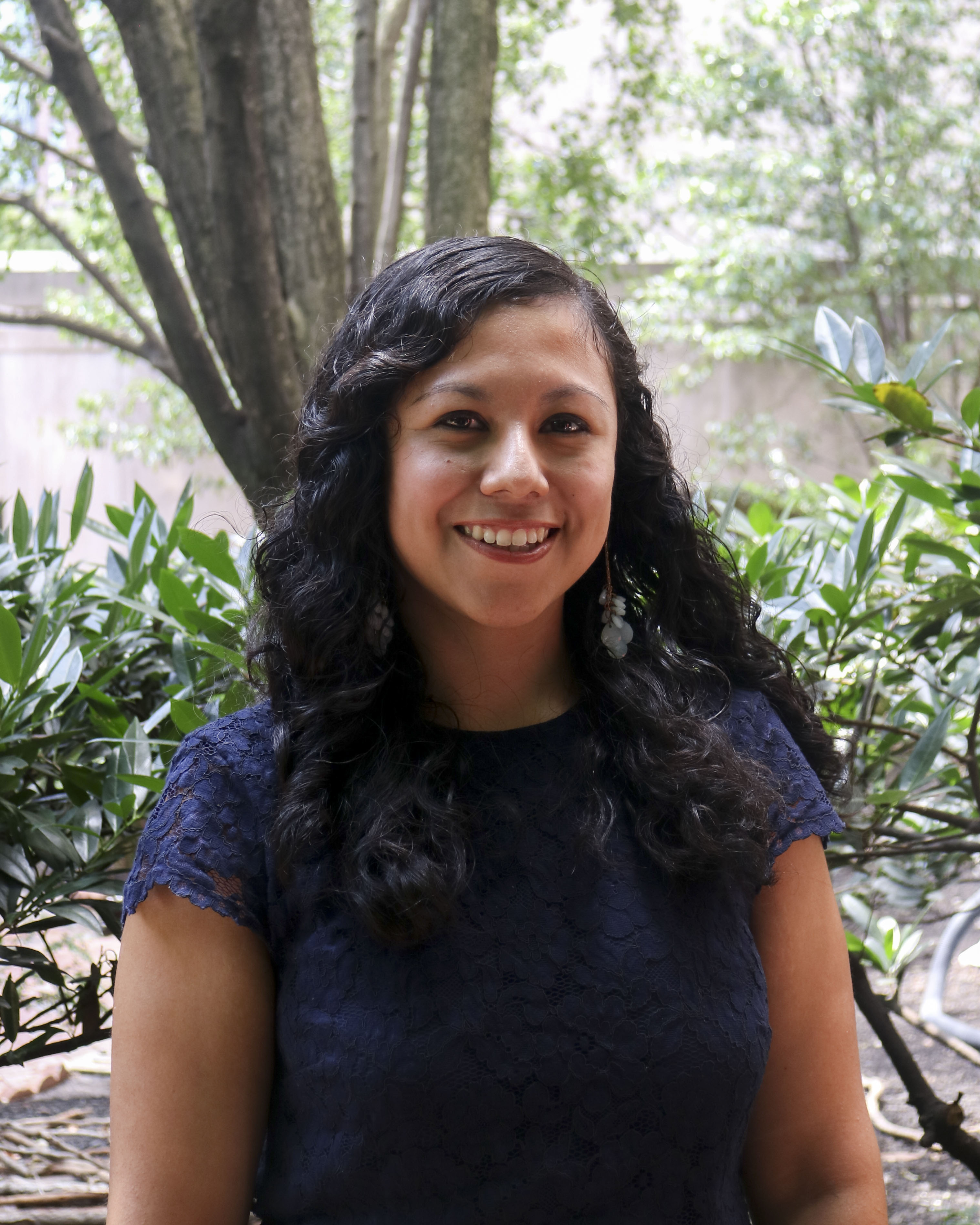 As a student at Barnard, Melissa E. Flores ’16 worked as a lab and teaching assistant in the introductory biology labs, conducted research in Professor Alexandra Horowitz’s Dog Cognition Lab, and served as president of the CU Pre-Vet Society. She volunteered at the ASPCA and, after graduation, returned to Barnard for a lab associate position in the Department of Biological Sciences.

For Flores, her accomplishments are especially poignant.

“Graduating with a psych major and two minors in bio and chemistry, I still didn’t really think I was a STEM person,” said Flores. “I had a really hard time believing that identity, struggling with not seeing myself represented in the STEM classes I was taking or in any of the scientists that I was coming across.”

Now, as the administrator for the Biology Department, an instructor in the introductory biology labs, and a researcher in the Snow Lab on campus, Flores’ mission is to ensure that current and new students of color have an easier time seeing themselves as scientists.

Flores, originally from Los Angeles, chose Barnard after participating in the Barnard Bound program, which invites high school seniors who self-identify as students of color to campus for an open house about all things Barnard.

“There was just this feeling right away that all the people who were there were very excited about what they were doing,” said Flores. “That was really what sealed the deal for me, participating in Barnard Bound.”

Once on campus, Flores intended to major in a humanities discipline. However, because of the Nine Ways of Knowing distribution requirements (now called Foundations), she enrolled in Introduction to Biology with Professor Jonathan Snow, as well as a couple of psychology courses.

“I liked the idea of learning about why people do the things they do,” said Flores, who ultimately declared psychology as her major. “I was thinking about fashion: What drives people to buy things, the neuroscience behind what’s going on, what makes humans do what they do?”

It took a series of mentors to encourage Flores to go into her current work as a research biologist. Through a psychology class in her sophomore year, Flores met Horowitz, her first major mentor on campus. “She was so encouraging when it came to having students voice what they believed could impact a methodology,” recalled Flores.

Following her interest in biology, Flores joined the Snow Lab to research bee immunology, where she gained another mentor in Snow.

“Melissa is amazing. She’s kind of a phenom, if you will,” said Snow. “I think she’s really taken on a really powerful leadership role in our department. I’m really excited to watch her go out into the world.”

Diversity, Equity, and Inclusion in Biology

In addition to mentors, Flores’ return to Barnard was also motivated by the opportunity to teach and to be a role model for the next generation of scientists.

“[Working] with first-years was really important to me,” said Flores, “especially that students of color were seeing themselves as someone who was at the front of the classroom.” Research illustrates how powerful it can be for women of color who are interested in STEM fields to have role models who look like them.

The 2020 murder of George Floyd and subsequent international protests crystallized for Flores the need for increased representation. That summer, a cohort of current students petitioned Barnard’s STEM departments to redesign the major requirements with a greater focus on inclusivity and anti-racism.

“After the murder of George Floyd, we as a department [wanted] to say something, but we [didn’t] want it to just be words,” said Flores. “That was something I was really passionate about. As a person of color, this had a really intense impact on me, and I [didn’t] want to leave this department without actual change coming from whatever we put forward.”

“We decided to focus on intro bio because it’s the biggest course in the department,” said Flores. “It’s also often the first interaction that students have with the Biology Department. We wanted to close that gap and not have intro bio just be another ‘weed out’ course.”

Flores and her colleagues also thought the discussion sections would help ensure that students were connecting — especially in the fall of 2020, when classes were online.

“One of your biggest resources is your peers,” said Flores. “We wanted to remind students that science is a collaborative experience. It’s not about competition and being top dog.”

Another motivation for the curricular redesign was finding ways to encourage conversations about science in society. “The way that I learned biology, and the way that we’ve traditionally taught biology, is as something that’s sort of separate from society,” said Snow. “And I think that leads to a sense that we either don’t understand the links between biology and society, or don’t know about them, or don’t care about them.”

To consciously push against that separation, students in the redesigned classes study topics around racism and sexism in science, differential impacts of global warming on different parts of the world, and the lasting impacts of redlining on the health of communities, among other topics. To ensure smooth implementation, the Biology Department received a grant from Barnard’s Diversity, Equity, and Inclusion Council to have a facilitation workshop with the Center for Engaged Pedagogy to learn about leading discussions on difficult topics.

The mission of connecting science to the world is especially timely in light of the COVID-19 pandemic, where a lack of scientific understanding can literally prove deadly. “It’s important to understand science but not keep it behind a gate,” said Flores. “[We have to] be able to bring it to others, and bring it to the communities that need it and that are impacted by structural inequities where lacking access to knowledge keeps you from being able to help yourself.”

I found everything I was looking for and more in the Biology Department.

The new initiatives in the Biology Department are part of a larger matrix of programs at Barnard that work toward improving representation in STEM. Flores named the Hughes Science Pipeline Project, the Beckman Scholars Program, the Inter-Collegiate Partnership with LaGuardia Community College, Barnard’s summer opportunity programs, and the Science Pathways Scholars Program as examples of how Barnard supports students at all stages of their scientific careers.

The early effects of these initiatives are already visible in some areas. Much like Flores, Abigail Gutierrez ’20 — who graduated with a degree in biology and now works as a lab specialist for the introductory biology classes on campus — also benefited from the department’s culture of mentorship. For Gutierrez, a key mentor was assistant professor Alison Pischedda, with whom she worked as a research assistant in the Pischedda Lab and as a TA in her animal behavior lab course.

“[Pischedda] was foundational to [helping me navigate] the jobs that I managed to get,” said Gutierrez. “She was always looking for things for me and helping me out.”

Now, in leading these new discussions for the bio labs, Gutierrez is excited about how these changes will continue to shape opportunities for students in the future. “I think I very well would have benefited from that introduction to the way that science connects to society, because science — biology in particular — cannot be learned in a vacuum,” she said. “I think that gave a lot of clarity to students. You can question the way that science has evolved to be in this world.”

And not every student needs to be encouraged to see themselves as a scientist. Sophomore Roopa Irakam ’24 knew she wanted to be a STEM major when she arrived at Barnard — she just hadn’t had her sights set on biology. However, she said, “I was quickly drawn to the department because of its incredibly welcoming staff, the various opportunities students can get involved with, and their commitment to making sure that we are learning biology through more than just a scientific lens.”

Irakam noted the Seminar & Coffee Hour Speaker Series as one of her favorite aspects of the department. “At a historically women’s college, it was really important to me that we were reminded that anyone could be a scientist,” said Irakam. “The Biology Department makes sure that individuals who have been discriminated against feel welcomed and encouraged to pursue their interests. I found everything I was looking for and more in the Biology Department.”

Athena Chin ’21, a recent graduate of the department who was heavily involved in the anti-racism group, noted the coffee hour series and the curricular redesign as key changes. “I think both initiatives will introduce more representation in the field, diversify perspectives in science, and challenge students to question how and who produces scientific knowledge,” said Chin.

She added, “I remember how attentive everyone was in the working group, which really showed their dedication to amplifying voices of students of color.”

“I really do want to highlight what I think has been great progress in the department,” said Snow. “But it’s also not a 100% happy story, right? It’s acknowledging that it’s a real work in progress.”

Snow and Jessica Goldstein, a senior lecturer in biology, are working with Barnard’s institutional research department to quantify the impacts that these new changes will have on the department in the coming years. The goal is to use this data — which currently takes the form of surveys and anonymized demographic data for classes, majors, and where students go after taking biology courses — to continue to make changes toward greater inclusivity.

“We really did some amazing things in a very short period of time,” said Snow. “And now we need to make it a sustainable process.”